The younger Harrington, Llewellyn Harry, was born in 1883.  I’ve said above that when his mother was widowed he was still living at home; he was probably doing his architecture and surveying training at the time, or moved to Bromley to begin it.  Unlike William, Llewellyn did become FRIBA.  In 1910 he married Eliza Hillier, a woman from West Ham where the Harringtons may have had cousins.  Llewellyn may have been working for KPEC before 1915 but I have no evidence of it before that year and some evidence to suggest the opposite: although William and his wife attended the Norrises’ reception at , given in March 1913, Llewellyn and his wife didn’t.  There’s plenty of evidence that Llewellyn worked for KPEC from 1915 to the mid-1930s   William Harrington’s death in 1930 led to the closing of KPEC’s offices in Burnt Ash Lane Plaistow, Llewellyn preferring to work from an address in Croydon.  Despite working for KPEC for 20 years, Llewellyn still didn’t seem to have known either William Gilbert Allen or Henry Norris very well: he didn’t go to or send a wreath to either of their funerals.

The land on which KPEC built the estate was bought in 1928.  Design work for the estate, including the new road called , began straight away and the first planning applications were made in 1929.  Brentford and Chiswick UDC is satisfied, based on the drawings that went with the original planning applications, that Llewellyn Harrington did all the design work for KPEC’s housing estate at Chiswick Park.  I haven’t seen the actual planning applications, just the Council Minutes so I’m certainly not going to argue with the Council’s conclusions.  However, I will say that until July 1930, all KPEC’s applications were in the Minutes with William Harrington’s name on them.  I would take that to mean that although Llewellyn was doing the designs for the estate William, as the senior man in the firm, was signing them off.  After William’s death (1930) the Minutes list applications from KPEC with no name at all, all except for (1931) which is listed as from Llewellyn Harrington.

KPEC built three kinds of properties on the estate:

-           maisonettes; and I detect the hands of William Gilbert Allen and Henry Norris here, even down to the maisonettes being designed as a variation on a house: and

Each of the plots was generously-sized.  The rooms in the properties are large and the front gardens are bigger than anything KPEC built at Bickley.  You can see all the actual addresses in the files on KPEC Chiswick.

The list and discussions below are based on a visit Roger and I made to to look at the properties on the ground.  We were plagued by downstairs rooms turned into garages; and also by the original applications of one or two properties which were changed half-way through the design process to incorporate a garage when built.  It was not always easy to tell which type of garage was which. 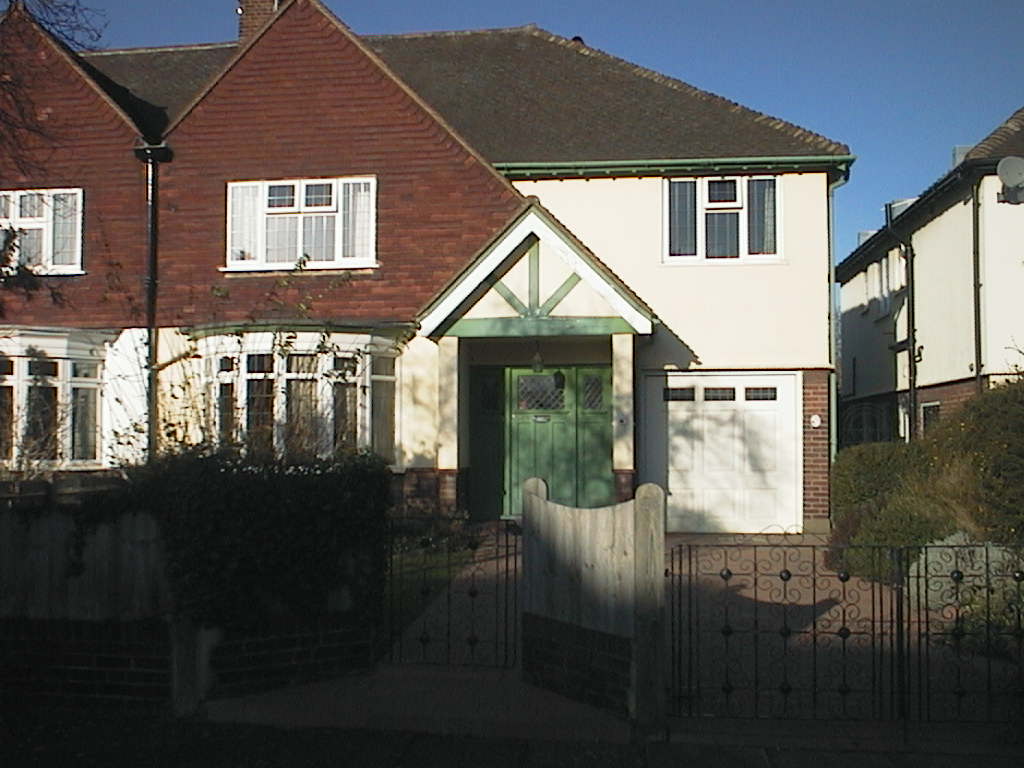 24 Devonshire Gardens was part of the first group of houses built on the Chiswick Park Estate: 1929-30.  As photographed, it has an integral garage that I think was once the dining room.  Other features of the house are still as built, with variations on the Bedford Park themes used on KPEC’s properties at Bickley.  One change from Bickley, though, is the incorporation of two gables into the design, making interesting features at the cost of a more complicated roof construction; it’s something you can see elsewhere on the estate.  24 Devonshire Gardens has two gables.  One is a dominating feature, steep and wide and clad in dark wood; it has an attic room in it.  The other is over the porch, smaller (obviously) but echoing the bigger one’s sharp angle.  The part of the house above the porch is white-painted render to make a contrast with the wood cladding and the red-brown bricks at ground level.

Another big break with what was normal at Bickley is the abandonment of the double-height bay.  24 Devonshire Gardens has a bay on the ground floor only.  It’s design is different from anything at Bickley, too: each window is at a slight angle to the next, creating a shallow, angled semi-circle.  The attic window above it is flat to the front of the gable.  The house’s smaller details are more like Bickley however: the idea of a three-part front door in the porch - central door with wooden panels either side, with windows at the top of all three; the division of the windows into a small pane at the top with a long pane below; the chimneys used as a design feature. 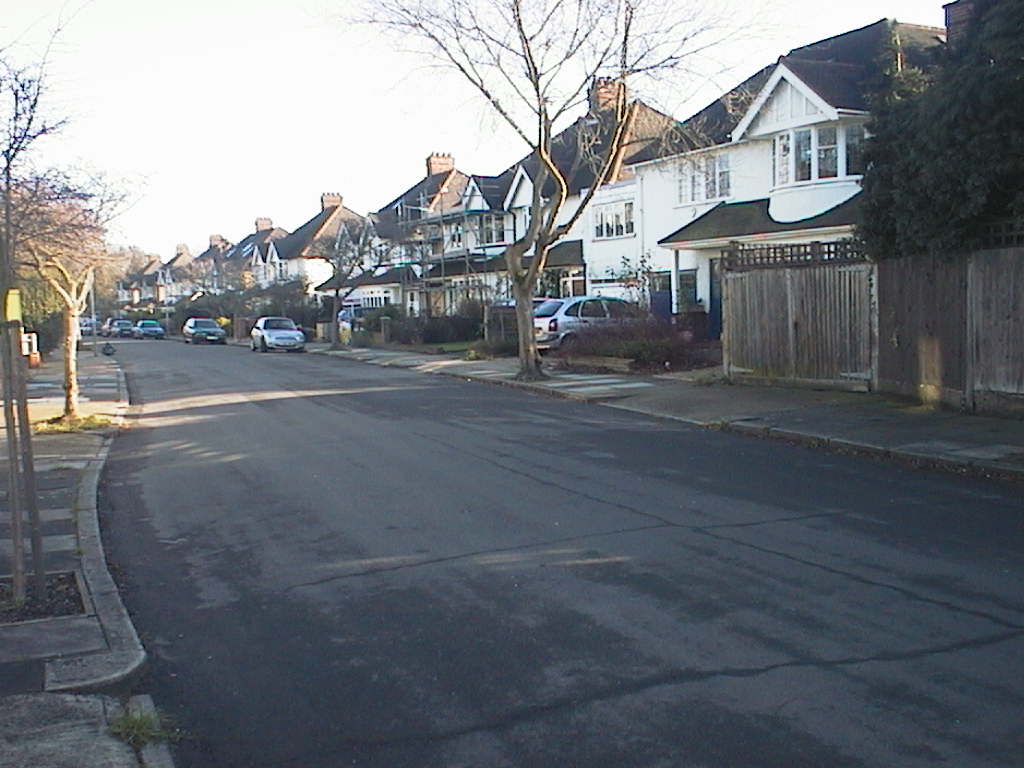 This is a long view of Kinnaird Avenue though please note that the nearest house is not by KPEC.  Kinnaird Avenue was the only completely new street on the estate.  All the houses in it were built to the same design, in 1930-1931.  In its Report on the estate, Brentford and Chiswick UDC particularly mentioned the design of the roof as an interesting feature.  Essentially it’s in three parts: a turret-type structure above the front door and first-floor room, and a gable above a small first-floor bay jutting out from the main steep slope.  There’s more roof tiling below the first-floor bay. 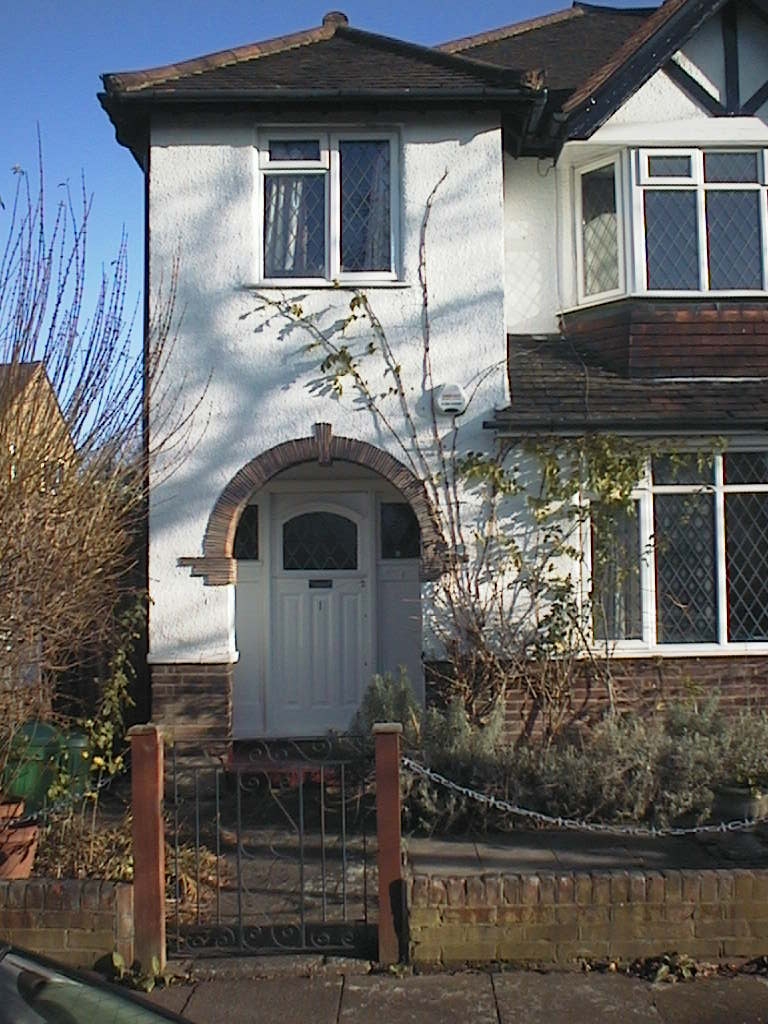 2 Kinnaird Avenue had its original front door, we thought: deeply inset into the porch, again in three parts with leaded windows at the top of each part.

Part of KPEC’s purchase for their Chiswick Park Estate was a site on Hartington Road which included two boat yards on the Thames, the land behind them and enough land on the other side of the roadway to build two sets of houses opposite each other; plus two detached houses beyond number 57. 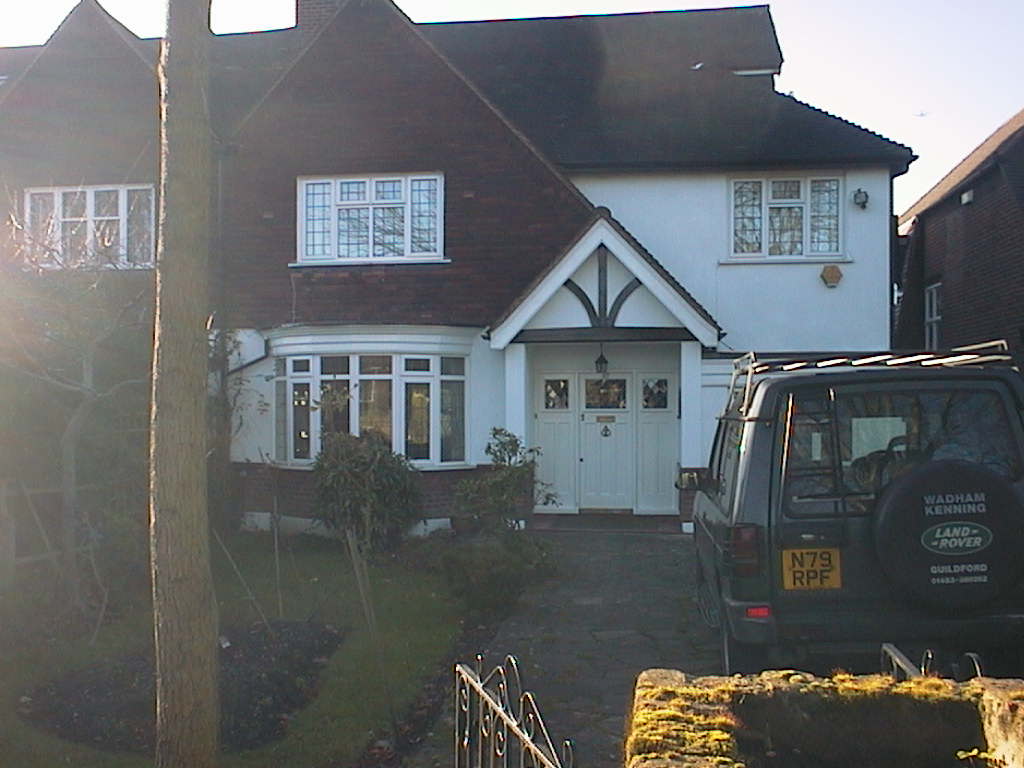 57 Hartington Road is at one end of the row on the river side of the street.  Both rows were built in 1931-32.  At 57 there’s another integral garage that I bet wasn’t there to start with.   The design used for all the houses in the two rows has the same wood-cladded gable above an angled ground-floor bay; and white-painted render above the rest of the frontage to contrast, as the houses in Devonshire Road.  It also has a similar porch to the Devonshire Garden design, although more imposing. 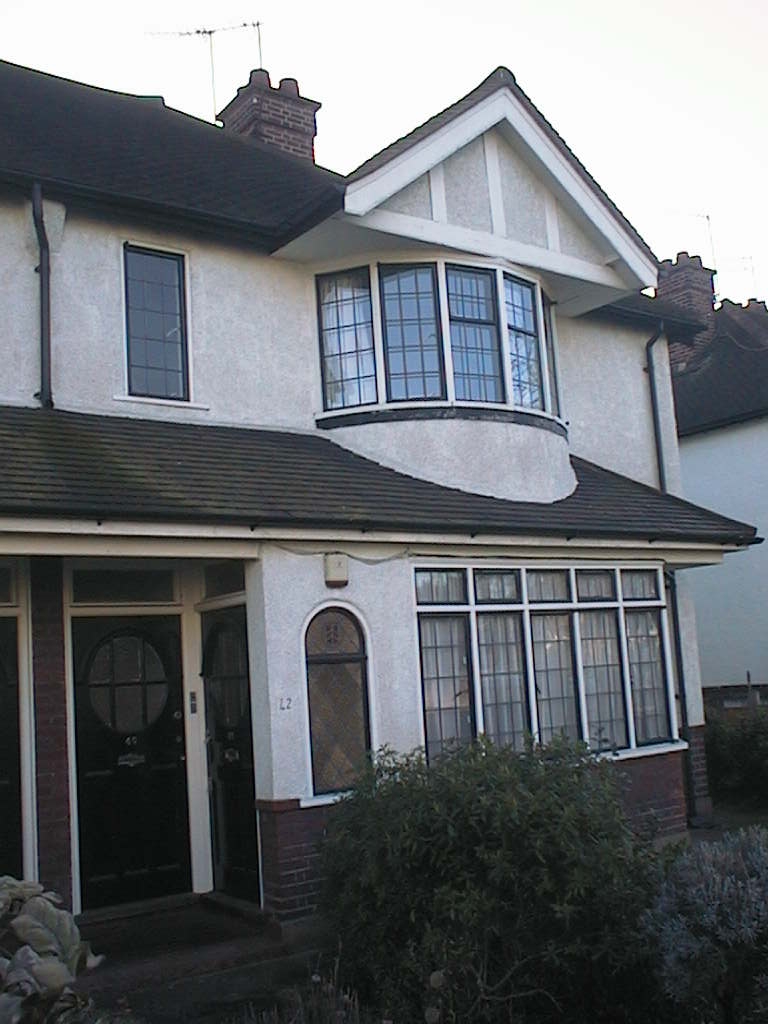 40-42 Grove Park Road is a set of two maisonettes with front doors at right-angles, next to and opposite the doors to 36-38.  The windows still have the original metal frames.  A long roof of brown tiles runs from 36 to 42 above the two front rooms of the downstairs maisonettes.  Above the roof each top floor maisonette has one of the shallow, angled bays used all over the estate; with a steep-sided gable on top of it.  The first floor is white-painted render.  This group of 12 maisonettes was built in 1932-33. 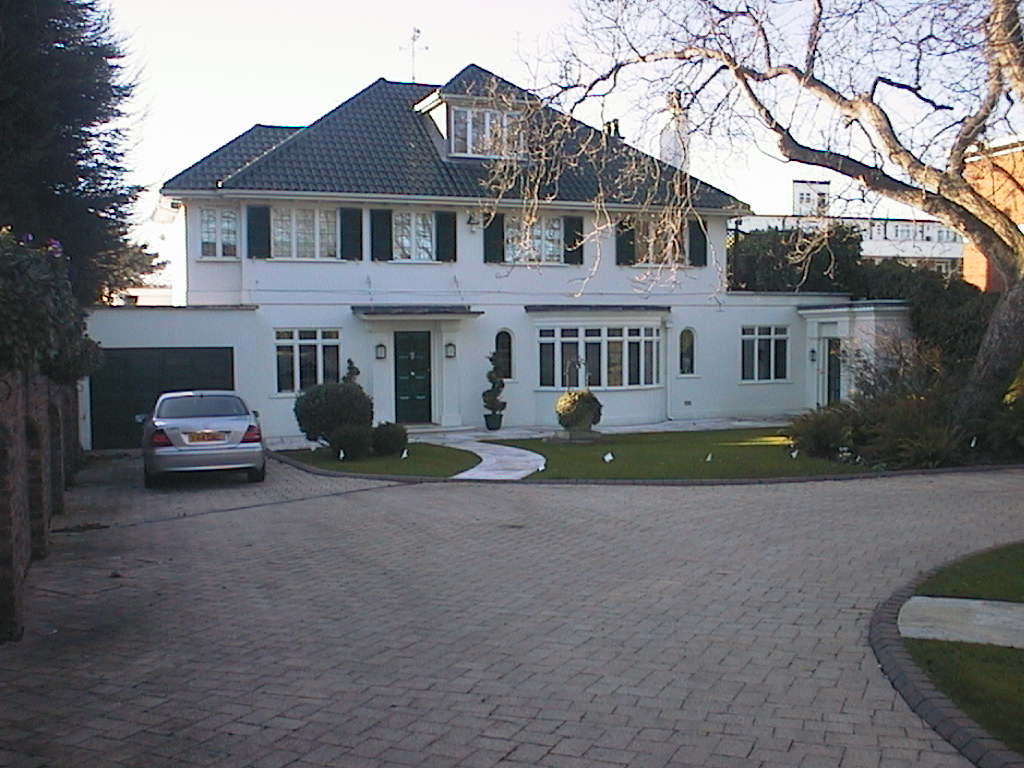 61 Hartington Road is Chiswick Park Estate’s pièce de résistance.  The planning application went in in December 1931 but no one was living in the house before 1935 so the actual building of it was probably held up by the grim economic times.  Brentford and Chiswick UDC’s Report on the estate mentioned particularly the building’s pantiles, which (the Report thought) gave the house a Mediterranean feel; I’d add to that the way all the brick-work (at least, all that you can see from the road) is painted white.

Ignoring the large amount of paving in front of the house, which I’m sure is modern, I’ve debated endlessly whether the garage is original; and I think the small room at the far right (of the photograph that is), with a second front door at right-angles to the main one, is new too, though unobtrusively done.  I shall therefore ignore these doubtful parts of Llewellyn Harrington’s design to say how nice the rest is, and how different from everything else on the estate: no bays, no porch only a cantilevered overhang above the front door; there are no gables at the front, though the roof is a complex design suggesting that the frontage on the river side (round the back in this photograph) may look completely different; and just the contrast of the white walls with the brown tiles on the roof to liven up the roadside frontage.  I think the design is a break with the influence of Bedford Park and shows that Llewellyn Harrington was keeping up to date with changes in design style: in that straight frontage you can see a hint of the Bauhaus; the way the room at the right disturbs the straight frontage is the reason why I believe it may be a later addition.

59 and 61 Hartington Road, and the maisonettes on Grove Park Road, were the last properties built by KPEC at Chiswick Park and with them the estate was complete.  On small sites a short distance from the estate, KPEC built two houses on Sutton Court Road (1932); and two maisonettes on Ellesmere Road (1933) originally designed as one house but rejected in that form by the Council, which had scheduled the street for flats only.  When the Ellesmere Road properties and 61 Hartington Road were finished, KPEC wound itself up and (I suppose) Llewellyn Harrington moved on to other contracts.

[ROGER THE LAST IN THIS SEQUENCE IS SLLEITCH]

IF YOU WANT TO KNOW MORE ABOUT THE SOURCES OF ALL THIS INFORMATION, SEND ME AN EMAIL AND I’LL SEND YOU THE SOURCES FILE.