FRANK LEONARD POOLE was also apprenticed to his father Josiah in Southampton.  Then, he too went to London to work for William Poole’s business.  He wasn’t a partner, at least not at first.  References in the minutes of Wandsworth and Fulham councils are always to William Clinch Poole alone until just before his death, and in 1901 Frank Poole told the census taker he was an employee, not a partner or an employer.  Frank Poole had married Kate Brider in 1899 and in 1901 they were living at 91 Leathwaite Road Battersea, convenient for the office.  His sister Ella was living with them; and all three were renting rooms from the householder Clarence Lightfoot.  Lightfoot was a carpenter.  I wonder if he worked for Allen and Norris?

The Builder on 22 September 1911 stated that Frank Poole had designed the houses that were being built by Allen and Norris on their estate at Southfields, Wandsworth; they built houses to the same design at the Crabtree Lane Estate in Fulham.  It’s possible that the first design for Allen and Norris done by Frank rather than William Poole was the short row on Niton Street; but that’s just a hunch of mine, the application was from William Poole’s office, not by any one in particular who worked there, so there’s now no way of telling. My hunch about Niton Street is because Frank Poole’s design for Southfields is an even bigger move away from William’s design for Morrison’s Farm; perhaps it shows the generation gap between the two brothers, the younger growing up (as it were) with Bedford Park. 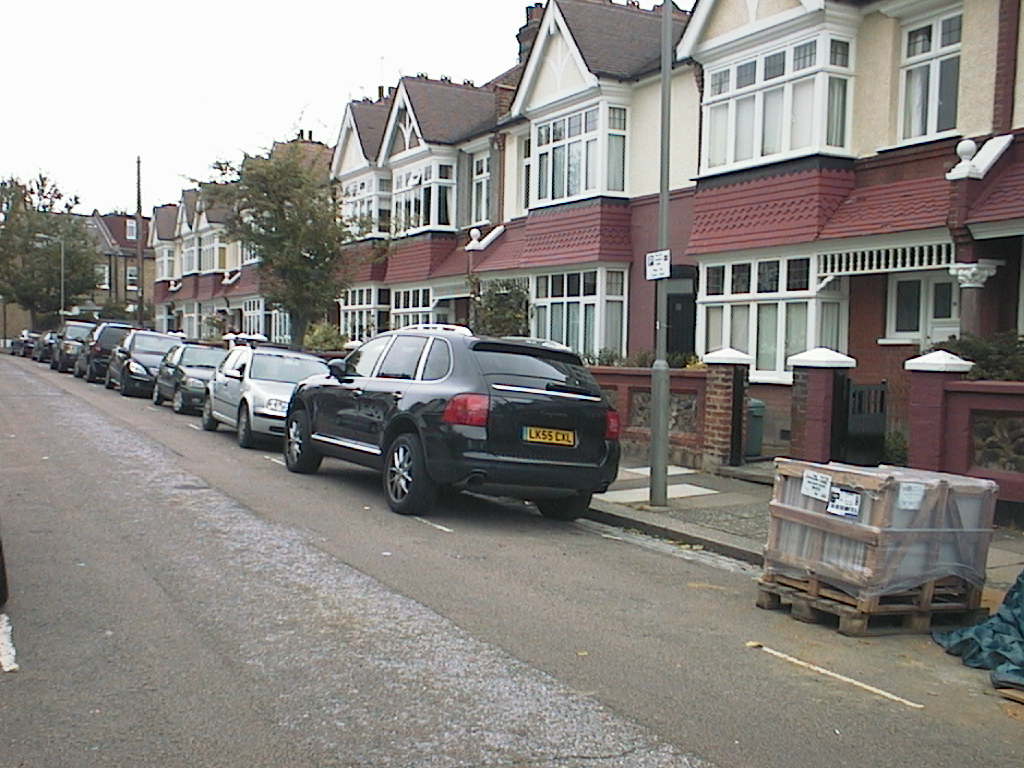 When I visited Southfields, only having seen Morrison’s Farm before, my first impression was of brown-ness, rather than red-and-whiteness.  You can see that clearly on the picture of the north side of Gatwick Road Southfields.  The picture of 2 Crabtree Lane looks pretty brown too but that was a photographic slip-up on my part!  When I was looking at it, it gave an impression of whiteness  Bedford Park-type features in the Southfields design are:

-           the front door is at the edge of a cube-shaped ground plan; the bay sticks out in front of that and a tiled overhang is built from the edge of the bay across the front step to the house next door: a porch of sorts but more in the manner of Bedford Park than Victorian England because there’s not much protection from the rain while you’re waiting to be let in

-           front door with a window at eye height; and a narrow window or windows either side of it; some houses have a round window very similar to windows I’ve seen on houses in Bedford Park

-           white-painted railings; but unlike at Bedford Park they’re hanging down from the overhang-cum-porch.

Southfields also has one or two features carried over from Victorian England: a column with a Corinthian-style top to it holds up the side of the overhang-cum-porch that is nearest the next-door house.  The column isn’t white-painted stone; it’s red-brown marble, adding to the general brown effect.  Apart from the column-top, though, there are no curvy decorative features at all.

The scallop design first tried out in Niton Street is now very prominent, particularly on the bay (between the bay’s two windows) and on the overhang-cum-porch.  Perhaps Frank Poole thought of it as his calling-card.  As well as in the tiles, the row of scallops is done in lead below the windows on the first floor of the bay.  The scalloped lead may have been supplied to Allen and Norris by William Hall; Hall ran a business based in Battersea that made lead panels.

Frank Poole’s design for Southfields was the last work by either of the Poole half-brothers for Allen and Norris, because the partnership built no new houses after the Crabtree Lane Estate (1911-16).  Frank Poole’s next commission was the design of the extensions to the Columbia Phonograph Company’s works at Bendon Valley Wandsworth.  Following the clients, Frank Poole’s business moved away from Clapham: in 1912 its offices were at 340 Balham High Road.

[ROGER THE NEXT IN THIS SEQUENCE IS SLHARRI]

IF YOU WANT TO KNOW MORE ABOUT THE SOURCES OF ALL THIS INFORMATION, SEND ME AN EMAIL AND I’LL SEND YOU THE SOURCES FILE.